Participation in the 2020 Census ensures that your community is represented fairly and receives its share in the distribution of more than $6 billion in federal funds to Kansas annually.

less than 10 minutes in length 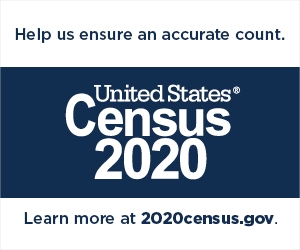 Residents can respond online, by phone or by mail through

Key Dates & Timeline – Some dates adjusted due to COVID-19

March 12 – 20
Households will begin receiving an official Census Bureau letter with their GEOCODE attached. The letter will have detailed information how to respond to the Census online (the preferred method), by phone or by mail with the original mailed application. No additional paper applications will be available through the website.
March 30 – April 1
If someone has not responded, a follow up reminder will be sent to them during this time period.
April 1
Census Day! By this date, every home in the United States will have received a letter with a GEOCODE and invitation to participate in the 2020 Census.
June – September

Census takers will begin visiting group living situations such as students who live on campus, people living in senior centers and others who live among large groups of people.
June – September

Census takers will go door to door to visit homes that have not responded to the 2020 Census.